The feral pigeon (Columba livia var.) is one of the most common birds you see in and around our towns and cities. It has become semi-domesticated to some extent but it is the most serious bird pest associated with human habitations.

Their nesting and feeding habits together with their life-cycle all contribute to their high pest status. Feral pigeons also carry diseases that are harmful to man.

Feral pigeons are widely distributed and are frequently found in large flocks in cities and built-up areas. Much of the damage caused by pigeons arises from their infestation of buildings.

Heavy fouling occurs at the places where the birds roost, such large buildings with ledges. This is not only unsightly but has a destructive effect, as the acidic droppings will erode the stonework over time. Gutters and downpipes often become blocked, leading to localised flooding and ingression of water into properties which in turn leads to a whole host of associated problems. The nests become more substantial with each brood raised. They are prolific breeders.

If you have pigeons in the loft of your home or within your business premises (warehousing, engineering works, etc) give us a call at HERDpestcontrol, we have the ability to deal with Pigeon removal and Pigeon Control. 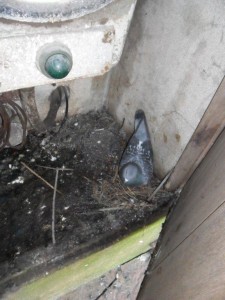